In computing, a visual programming language (VPL) is any programming language that lets users create programs by manipulating program elements graphically rather than by specifying them textually. A VPL allows programming with visual expressions, spatial arrangements of text and graphic symbols, used either as elements of syntax or secondary notation. For example, many VPLs (known as dataflow or diagrammatic programming)[1] are based on the idea of “boxes and arrows”, where boxes or other screen objects are treated as entities, connected by arrows, lines or arcs which represent relations [2]

Programming chipKIT, or for that matter Arduino, may be complicated for beginners. Visual Programming environments, such as of ArduBlock, can be a simple and easy solution for such beginners.  ArduBlock is a programming environment designed to make “physical computing with Arduino /chipKIT as easy as drag-and-drop.” Instead of writing code, worrying about syntax, and (mis)placing semicolons, ArduBlock allows you to visually program with an snapped-together list of code blocks.

ArduBlock builds on the simplicity of Arduino /chipKIT, and creates a perfect beginner gateway to physical computing. Instead of tearing your hair out debugging, you can spend your time creating! (2)

ArduBlock will work as an add-on, or more precisely a a tool, in chipKIT programming environment. It requires that you have either MPIDE or UECIDE installed. The benefit of that, though, is – because MPIDE or UECIDE are multi-platform (Windows, Mac, or Linux) ArduBlock works in all of these platforms .

How to install in MPIDE and in UECIDE programming environments? See below:

ArduBlock comes with no installer, just a Java file that needs to be stored in a very specific location in MPIDE.

The contents of the top text box defines your sketchbook location. Memorize that location and close MPIDE.

Note: each folder is case sensitive.

The Ardublock file you downloaded earlier needs to locted inside tool folder within MPIDE sketchbook.

ArduBlock works together with MPIDE editor – it relies on the IDE being open in the background, so MPIDE window must remain open! 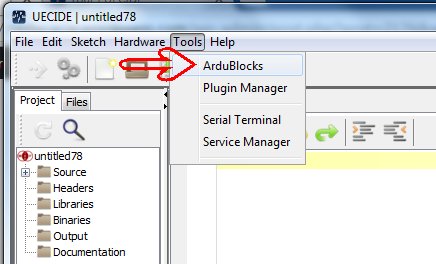 So tha is it! Just as with MPIDE, ArduBlock works together with UECIDE editor – it relies on the IDE being open in the background, so UECIDE window must remain open!

Start ArduBlock either in MPIDE or UECIDE whichever IDE you installed.

The ArduBlock window is split into two halves. The leftside of main interface contains the modules that contain blocks used for programming. 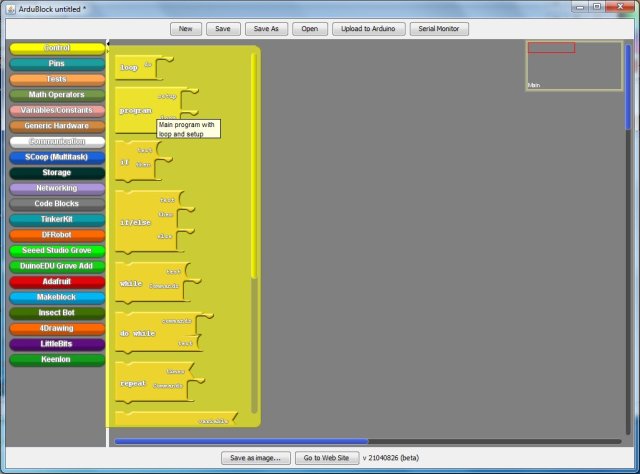 From dragging and dropping Program block, you can drag and drop more Blocks over, snapping them into either the setup or loop sections of Program block.

Before you start uC32 board must be connected to your PC snd Basic I/O board installed on top of it.

Drag, drop and snap the required blocks to obtain the result shown below: 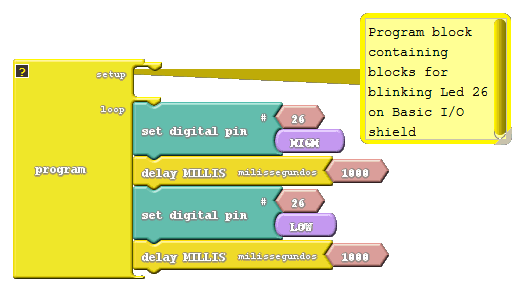 Now if you upload clicking Upload to Arduino you will see on MPIDE editor the sketch and this will be automatically uploaded to chipKIT uC32. After uC32 board resetting you will see Led 26 on Basic I/O shield blinking.

All exercises contained in “Getting Started with chipKIT” book by Chuck Hellebuick have been carried out based on uC32, Basic I/O shield and the components mentioned above. Pins have been adapted to work with Basic I/O shield.

Chap 2: As shown above

Before writing this tutorial I tried Scratch for Arduino (S4A),  and other Visual Programming editors. None do seem so much functional as ArduBlock, specially because they all worked only as an interface connecting serially, or by network to Arduino / ChipKIT.

ArduBlock, and now BlocklyDuino,  a new and promising Web-based visual programming editor for Arduino /chipKIT, are ideal for beginners that, after learning to program with graphical elements, can easily progress to more complex Arduino C-like programming language.

Electronics engineer, part-time webmaster and owner of "Aliatron", a tech-oriented company registered in Portugal and Mozambique. Owner of "EU Halal", a trading and consulting company in Halal & Tayyib, 100% stun-free compliant.
View all posts by Tayeb →
This entry was posted in Uncategorized. Bookmark the permalink.